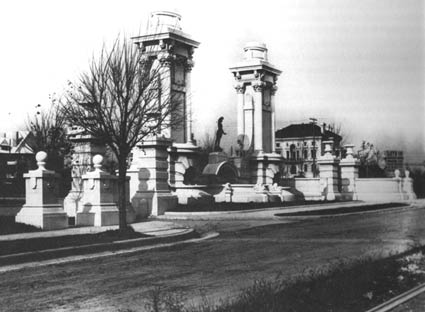 The massive, impressive gates that mark the entrance to Kingsbury Place were completed in 1902. They were designed in the Beaux-Art style by Thomas P. Barnett, head of the firm of Barnett, Haynes and Barnett. It was the intent of the street’s developers that the presence afforded by the gates would attract buyers to the new enclave.

When this photo was taken, Union Boulevard was still a dirt road. Note the sign at the far right end of the gates, advertising lots for sale. The houses visible in the background are on Washbington Terrace, Kingsbury Place’s neighbor to the north.
Barnett used Bedford limestone as the material for the gate structure. Embellishments include two tall, capped towers flanked with Corinthian columns and four lesser towers that are topped with stone urns. In addition, a pair of smaller scale pillars, topped by stone globes, flank the pedestrian entryways. There are three fountains that still work, and decorations feature popular Victorian motifs of dolphins, griffins and lions.

The whole extravaganza is topped with a bronze sculpture of a nude young woman. The sculpture was executed in the classic style by artist Clara Pfeifer, who was paid the handsome sum of $7,000. It was a bold commission on the part of the Barnett firm. Nude statuary as public art was not universally accepted in St. Louis, and women artists were, at the least, seen as unconventional. Ms. Pfeifer took two years to complete the six and one-half foot tall, 1,000 pound statue, which was officially named Awakening Spring. Over the years, the bronze nude has been fondly named “Carrie Kingsbury.”

One critic of the era described the gates as “Victorian classicism at its wildest,” and another described them as “pretentious.” But, they have stood the test of time and changing fashion, and are now seens as a beautiful and valued architectural landmark.

The second pair of gates to Kingsbury is located at Clara Avenue on the street’s western edge. The gates and gatehouse were designed in 1910 by Wilbru Trueblood, a well-regarded architect who, at one point in his career, had been a partner in Theodore Link’s firm. The Clara gates were built by the A.J. Taussig Building and Construction Company at a cost of $4,000. The handsome, small structure was intended to provide storage space for groundskeeping equipment and to provide shelter for a guard.