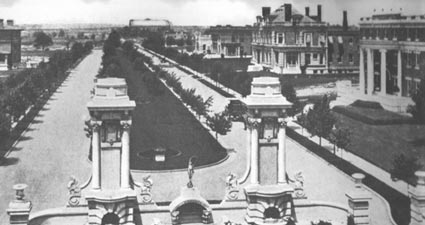 The first owners who held title to the land on which Kingsbury Place stands were Joseph Marie Papin and his wife, Marie Louise Chouteau, a daughter of one of the founders of St. Louis. The land was granted to Mme. Papin by the Spanish government in 1796.

The land grant, referred to as Survey 378 after the Louisiana Purchase, was bounded by Union oulevard on the east and the present Hanely Road on the west. The northern boundary was Maple Avenue and the southern boundary was on a line with the St. Louis Art Museum in Forest Park. The River Des Peres wandered through the property from the north-central portion to the southeastern segment of the land.

In 1808, Papin and his wife divided their 3,000 acres among their ten living children. The stage was set for eventual development. Parcels of the land changed hands, but remained in the possession of family members fo several years. By 1883, a map showed various parcels owned by the Watermans, Kingsburys, and Degivervilles as family members and holdings of non-family members such as Daniel W. Bell. The Bell property lay between today’s Delmar and Kingsbury Place and featured a four-acre pond and a popular “resort” known as the Delmonico Restaurant that occupied the old Bell mansion. The pond was located where numbers 23 and 25 Kingsbury Place now stand.

With the dedication of Forest Park in 1876 and the development of Westmoreland and Portland Places and Forest Park Terrace (on today’s Lindell Blvd.), the opportunity to develop the former Papin land grant was ripe. In 1902, a deed was drawn up between the Bell Place Realty Company, trustee Lewis Bierman and parties of the third part John W. Harrison, Benjamin F. Edwards, and Lester M. Hall. The deed gave the latter three the “right to maintain, improve, protect and manage the Kingsbury Place subdivision.”

The land had been surveyed by Julius Pitzman, noted engineer, surveyor and planner who had been the Chief Engineer for Forest Park. Pitzman had laid out Vandeventer Place and Westmoreland and Portland Places, among others, and was considered “the father of the private place” in the United States. Pitzman also built his own house at #6 Kingsbury Place, and descendants of his live there today.

Early promoters of Kingsbury Place extolled the virtues of its land elevation. “The height…is so great that the southwest and south breezes come to it directly from the hills — cooled and freshened by their abundant foliage, free from miasmic vapors.”